Once or twice a year I make a trip to Amsterdam.

Now, if this were the blog of a more cavalier or lascivious man the remainder of this entry would be filled with stories about me puffing away the few remaining useful brain-cells I have in sweet-smelling smoke-filled coffee bars during the day and bed-hopping my way through the red light district in a drug-induced haze at night. Naturally, I would awaken every morning in an alleyway bereft of money… and pants.

Well I am terribly sorry to disappoint you but, this is not that blog, and I am not that man.

No, while I thoroughly enjoy every visit I make to Holland, they are all quite tame and have never involved anything more exciting than an uneventful walk around the streets of the city followed by a movie back at the hotel (no, not even that kind).

I’ll be honest, I struggled for a while to come up with something to say about Holland and its people that was both derogatory enough to fulfill the general parameters of my blog, and yet not so bad as to make my Dutch friends, some of whom actually read this, hate me any more than they already do. Since my prudish nature has robbed me of the opportunity to poke at the seedy underbelly of Amsterdam, I am forced to retreat to safer terrain such as…

As my physique suggests, I don’t typically have a problem finding food no matter where I am in the world and Holland is really no exception. In fact, Amsterdam is currently home to my favorite restaurant on the planet, a small place named Bistro Bij ons.
In this tiny little restaurant, they serve a traditional Dutch dish called Stamppot which is basically a pile of mashed potatoes, sauerkraut and bacon covered in gravy and topped with stewed meat.  For me eating Stamppot is a borderline erotic experience requiring my full mental attention to avoid moaning loudly with pleasure and ultimately being kicked out of the restaurant for disturbing the other guests. It’s like a pig and a cow are having sex on a bed made of potatoes… in my mouth. Finish that off with a serving of “flipped bitches” for desert, and it becomes obvious (at least to me) why this place holds a special place in my heart.

But, sadly, not all restaurants in Amsterdam are Bistro Bij ons, and not all Dutch food is Stamppot.

On one trip, we asked the concierge at our hotel for a recommendation, and he sent us to a place down the street named Envy (ostensibly named so to describe the feeling that passersby feel when they gaze upon its inhabitants). We realized, a bit too late, that this place was designed to trap those unfortunate enough to enter, keeping them weak by feeding them microscopic portions and ensuring that each course is prepared by a different shift. About two hours into our visit we began to desperately and fruitlessly seek escape.

FUN FACT: In Dutch “fusion” restaurants “check please” means “wait an hour and then bring me another ‘course’ consisting of 2 grams of meat, a drizzle of unidentified sauce, and a ‘foam’ of some variety”.

Eventually we escaped by asking the waiter for “chicken nuggets” and then, while he was confused and distracted, we struck him in the head repeatedly with a pepper-grinder until we were sure he wouldn’t regain consciousness until we were safely back home in the US. In hindsight, I think we may have been a tad overzealous and I sincerely hope that the pepper-grinder was not permanently damaged.

In another restaurant, on a different visit, one of the many courses of our meal had only two ingredients that I was able to confidently identify… 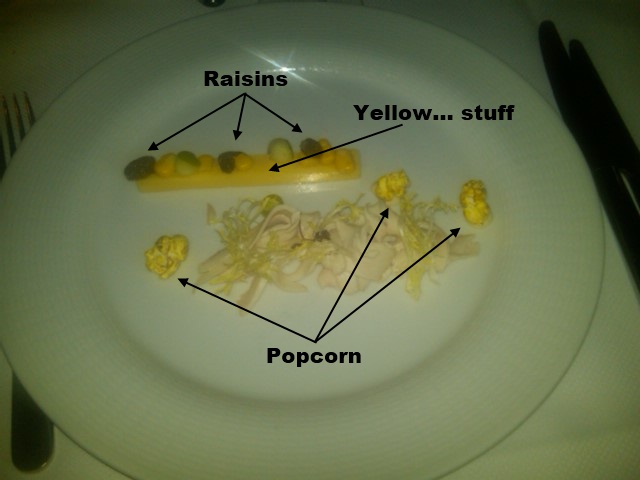 The long strip of mushy yellow paste still haunts me.

Considering what this dish likely cost, the profit they make off the investment in a large box of Sunmaid Raisins and a couple of bags of microwave Orville Redenbacher Popcorn must be amazing.

Ok, let’s wrap it up with a brief comment on my favorite meal of the day, breakfast. On each visit, in every hotel I have stayed in, they offer a buffet breakfast with the usual selections: eggs, bacon, sausage, etc. They all have a selection of breads as well and, without exception, near the breads they all have a display stand filled with boxes that look like the one below.

The fact that I have never seen a single person actually eat these, combined with the fact that the picture on the box looks like a large pile of mouse droppings on a slice of bread, made me suspect that this was some sort of national practical joke. Something like Rocky Mountain Oysters are for people who live in Colorado.

In an unprecedented display of bravery, on my last trip I decided to actually try them on some toast. After I took my first bite I would not have been surprised to look up and find all the Dutch people in the restaurant chuckling while clacking their wooden shoes together in amusement (or, whatever it is they do) but, not only was there no laughter, I also found out that they taste a lot like dark chocolate sprinkles, and not at all like rodent-poo as the box suggests.

Anyhow… I have learned some hard lessons when it comes to eating in Holland. Always pack a backup snack, don’t eat the brownies and, whatever you do, never ever trust the concierge.