I have traveled quite a bit in my lifetime and, honestly, I have been to places that a positively dull person such as myself has no right to visit. The problem is that I go to all these exciting locations around the globe, and instead of going out and seeing the sights in some of these beautiful places, I usually end up in my hotel room, eating the long-expired mini-bar snacks while reading email in my boxers.

Aside from the places that I have been to all over the US, I have also been to Paris, London, Dublin, Barcelona, Cancun, Athens, Shanghai, Hong Kong and Amsterdam (many times). I am probably forgetting some, but I think you get the general point. I am “well traveled”. And, however banal my activities are once I reach my destination, the stamps on my passport and the pile of gadgets I take with me on my trips, make me look like an up-and-coming international field agent on a clandestine operation for the US government.

I am currently in Las Vegas attending the Consumer Electronics Show (CES). For those of you that are unfamiliar with the show, it is a ridiculously large event filled with all manners of gizmos and gadgetry. Exhibits can range from pretty mundane things, like security systems and solar panels, to more exciting items, like fancy laptops, all the way to nerdgasm-inducing electronics like robots and 3D gaming.

For reasons that I am sure are abundantly obvious, I have wanted to go to this show since I was a zygote, and I was deliriously happy to be able to attend it for legitimate business reasons. You see, my job has become very focused on tablet computers, and CES is one of the best places to find out about “what’s next” in tablet computing. I guess.

This is only the second time I have been to Las Vegas (I went to CES last year too), a fact that seems to amaze just about everyone that I speak with about it. Is it really all that difficult to believe that I have not found the time to travel across the country just for the privilege of feeding my salary into those paper-shredders they call slot-machines?

*As the plane is landing in Las Vegas on my last trip*
Person: First time in Vegas?
Me: Yeah
Person: Do you gamble?
Me: No, I took math in school.

I mean, seriously people… do you know what the odds of winning are? Those machines are physical applications of well established laws of probability. There is a reason these casinos are lavish. Sheesh.

Anyhow… Since I don’t really do anything exciting here I thought I would share some of my discoveries from the thrilling tradeshow floors of the Consumer Electronics Show!

I know… try to contain your excitement.

I have only one thing to report from the South Halls: 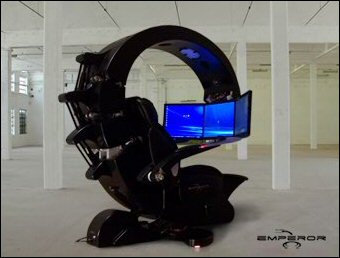 I intend to purchase this computer workstation and never leave it. I will ONLY invite people over so that they can briefly bask in my awesomeness, and then I will demand that they leave.

Although it wasn’t very large, I have to say some of the most interesting stuff at CES was at “Eureka Park”. It was a small collection of tiny companies with products that ranged from clever to batshit crazy.

In the clever category, I would place:
Cubelets by Modular Robotics. Cubes that you snap together to make a robot. A bit like Lego Robotics, but still pretty cool nonetheless.

In the batshit crazy category, I would place:
TxtRng… a thumb-ring stylus. Ostensibly intended to improve accuracy when typing on smartphones, but it felt a bit like trying to type with my toes.

If I had to summarize what the remainder of the floor was about, I would say “3D”. You could not swing an overpriced HDMI cable without hitting five 3D TVs (and about 20 people, incidentally). There was a display by LG as you entered the Central Hall that had over 120 3D TVs.

It was impressive, no doubt, but I still don’t know a single person who owns… or even WANTS to own a 3D TV. Who exactly are they selling these to?

After the “all work, no play” Central Hall, I thought the North Hall held some promise. There were many more booths, all smaller companies and I figured that would mean a much wider variety of gadgetry. That was, however… not the case. Here, let me share a map of the floor with you:

I took the liberty of highlighting in pink all the booths that were selling nothing but cases for iPhones. I spent about 2 hours walking around, looking at… gel cases. It wasn’t just the sheer volume of duplication that made this exercise idiotic, it is also the fact that each of these companies is duplicating something that is completely unnecessary.

What the fuck are you covering? Let’s look at an iPhone here:

Yes, Apple conveniently provided you with a cover. It covers the electronics, not only protecting them from damage but doing it with style. I loathe Apple, but they DO know how to design something. So, I ask again… what the fuck are you covering? You are covering a case that is made from materials specifically chosen to withstand abuse, created by some of the most highly regarded consumer electronics designers in the world with a skin that is probably made from recycled condoms designed by a minimum wage Chinese sweat-shop worker.

If you use, or even OWN, a gel-case, please punch yourself in the face. Again. One more time.

The remainder of the hall was “Automotive Electronics”, which equated to “speakers and chassis lighting”.

You can probably gather, by all of this, that I was a little disappointed in the North Hall.

And, that wraps it up for CES. I head home to NY tomorrow, rest for a day and then head off to Amsterdam so that I can spend my nights in a different hotel reading email in my boxers.

Try not to be jealous.