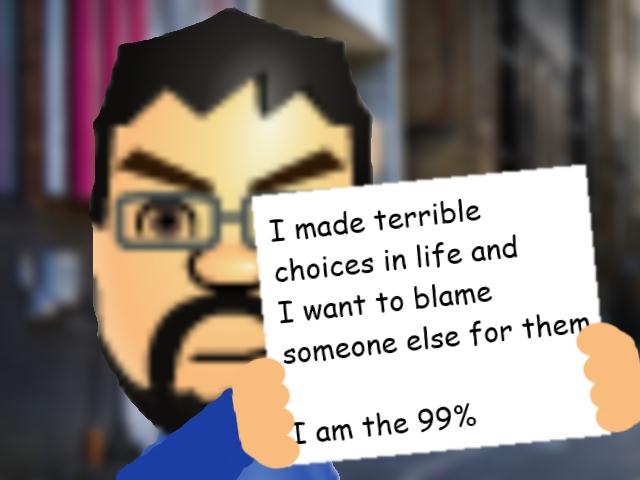 I know my reaction is a bit late for this one, but I think it’s high time I poured my thoughts out into a blog entry, otherwise my head might explode.

First of all, I sincerely tried to understand and empathize with the protesters. No, really, I did. Then, when I inevitably realized that their cause was retarded, I tried to ignore them. But now, since the media seems intent on continually feeding this mindless creature, I am just getting more and more pissed off.

I do not think I would be considered “well off”, certainly not “rich” and not even in the same galaxy as “the 1%”. So, if you work out the math (go ahead… I’ll wait), the implication here is that I am in “the 99%”. Before I cover the more salient points of my argument, let me bitch about this “we are the 99%” business.

Since I love math so much I want to share the joy of a simple calculation with you. It only requires two numbers too, so it’s easy enough for you to play along at home. First get an estimate of the number of “Occupy Wall Street” protesters; I checked and the latest number hovers around 5K. Next, get the latest Census data on the population of the United States; a quick search puts this at around 307M. Now… part over whole, times 100… (5K/307M)*100 = 0.0016%. So, maybe it should be modified to be “We are the insignificant percentage of loud-mouthed morons”? Yeah, you’re right, that wouldn’t fit on a sign very well.

What’s that you say? I’m a jerk and my calculation is bullshit because there are people “occupying” other cities the world around? Ok, lets multiply that by… what? 100? 1,000? Hell, let’s throw caution to the wind and just make shit up! Let’s say that there are similar protests of the SAME SIZE in 10,000 cities! ((10K*5K)/307M)*100. Congratulations… you are the 16%. Don’t even begin to tell me that, although there are only a small number of actual protesters, they represent us all. They do not. I vehemently resent the suggestion that this group of lazy asshats speaks for all of us “poor victimized people”.

To these so-called 99-percenters, I want to make this absolutely crystal clear: I am not one of you. Please remove me from the “99%” figure you have been throwing around and immediately update all of your marketing materials. You are completely within your rights to say “we are the 98.99999%” if you wish, but you do NOT have permissions to use the small percentage of the population that my corporeal form represents.

NOTE: While I am writing this the woman next to me on the train unceremoniously dumped her enormous bag of shit onto the seat between us, it’s bulk covering all the things I had next to me, breaking the unspoken rule that only 50% of the “buffer” seat is yours to consume. I am considering a protest wherein my fist briefly occupies her lower jaw.

Ok, let’s move onto the protest itself.

I do not like protests or protesters, in general, but I usually tolerate their existance without complaint. What has been fairly consistent about other protests I have seen is that there is a clear PURPOSE for the protest and ALL of the protesters agree on it.

In this case, there is absolutely no organization or leadership for this mob at all. It’s just a bunch of people hanging out in a park whilst whining about the bad hand life has dealt them. You could ask 100 different protesters what the point of their cattle-like occupation is and you would get 110 different answers (I am estimating that you will run into at least a handful of people with multiple personality disorder).

If I had to distill the arguments of the few protesters that have properly functioning neurons into a simple request I think it would be: “We want the rich people to pay their fair share!”. Sounds great. Ok, let’s run with that a bit.

Now, this is the part where I get into some pretty foreign territory for me because I am, by no means, an expert on financial matters. But I am going to try to take the arguments and apply LOGIC and not empirical knowledge of the financial domain. Let’s see how this goes.

Ok let’s say we have a “1-percenter” who is currently taking home (in the current income-tax model) $6.5M in income per year. Now, let’s say that the proposed change results in them taking home $5M instead, meaning that they have effectively lost $1.5M every year. Now, let’s just go out on a limb here and suggest that the REASON this person is a financially successful businessperson is that they are kinda good with that whole money-thing. Do you think that they will:

1. Meekly accept this giant loss in their net income

2. Do whatever it takes to increase their compensation back to where it was (if not higher) by, ultimately taking it out of the hides of those that work for them.

Let’s just say that I have my doubts that this group of pot-smoking hippies will have any noticeable impact on the lives of the rich. If I were a wealthy company owner and the government actually LISTENED to these idiots, I would start doing things like making my employees pay to get into the bathrooms. Just out of spite.

I have spent my entire parenting career trying to ensure that my children understand that they are NOT ONLY in control of their own fate, but they are RESPONSIBLE for it. I refuse to raise children that have the inflated sense of entitlement that these people have. My children will make mistakes, we all do. And when they do, they will NOT blame others for the hardships that befall them, they will pick themselves up and do what they can to make the situation better. And that will NOT involve sitting in a park smoking pot and playing guitar.

This whole thing is less like a protest and more like a Phish concert at an asylum if you asked me.